One of the most confusing parts of being a bald girl is how others react. For boys it’s a little easier, since men usually lose their hair naturally. Appearances in shopping centers usually result in kids staring at me blankly, not really knowing what to think. Sometimes I like looking at them. I can see the gears in their heads turning, as if to say, “What is this? A bald girl?” Even funnier (and sort of embarrassing) is when they call you a boy. I wrote a post several months ago about instances where people called me a boy (check them out right here) and surprisingly, I’m not alone in this.

I know what you’re thinking: Lots of alopecians exist, Peyton! But in my class there’s a girl, we’ll call her Ellie, who has a twin brother, and both siblings have short “boy” hair. The interesting part is that while we were taking class photos, the photographer was having us shift around on the bleachers. “A little to the right, sir,” he motioned to Ellie, as I shot her a sympathetic look and said, “Now you know how I feel.” The main takeaway of this is that if you have any kind of short hair, you’re going to be called a boy, no matter what gender you are. That isn’t to say you should have long hair though. Just be you. And keep watching those little kids get really, really confused.

Today, I am officially featured in the Ventura Boulevard magazine with their article here. In January, I got interviewed by the magazine, and two weeks later I did a photoshoot. Most of my quotes detailing the feeling of my Q&A with Ryan Shazier and my outlook towards being “afflicted” (big air quotes there) with alopecia showed up there, as well as my parents’ views about me. All in all, it was a great story to run (I may be a bit biased here) and I’m grateful for the publicity.

Since I haven’t been posting in a while (and I mean a while) I thought it would be fitting to catch you up on the major events so far.

I made it to the spelling bee once again and lost once again.

A local magazine came by for their Top Ten Teens list and came across me, even though I’m 11. I had a photoshoot and will be featured on the Ventura Boulevard magazine.

This year, the 6th grade science fair is optional, and I decided to do it. My project is about making concrete out of Martian soil and testing it against normal concrete.

I’m writing code for a new game called Micromanage Mars! You are the director of Mars operations, and you have to make sure all your meters never reach zero throughout the course of your mission. Throughout the Hab and the greenhouse, experiments, crops, and life support systems beg for your attention. Keep your crew alive and they’ll thank you!

As of last weekend, I have had alopecia for two years. It started out as universalis, then dropped to totalis. That means I’m getting closer and closer to hair!

This hasn’t happened yet, but it will in about two weeks! I’m going to the Olympic Peninsula Institute with the rest of the 6th grade for a week to learn about the forces of nature.

I recently won 7th place in the Math League competition at Mirman School, along with two of my friends who got 9th and 5th place with me. 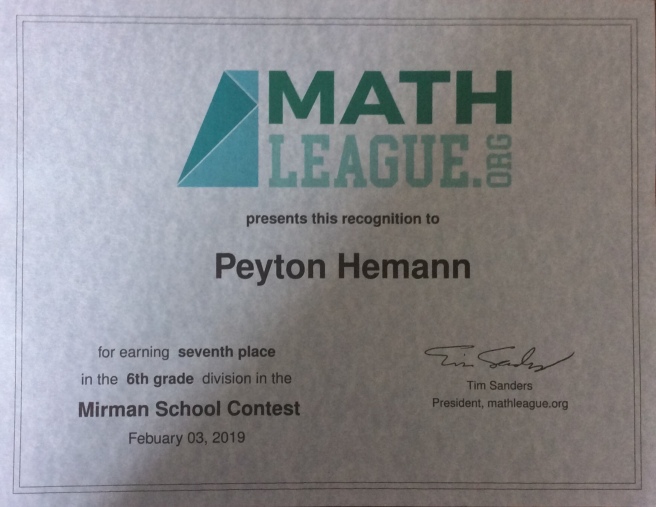 In a recent swim meet, I broke all of my personal records in the 50 freestyle, 50 breaststroke, 50 butterfly, and 100 IM.

What Doesn’t Kill You Makes You…Taller?

I now have both top and bottom braces in. Hopefully they’ll stay in for two years.

That’s mostly it for the past six months. Well, I hope you enjoyed this post and check out more from peytonpecia.

Recently, another huge milestone for alopecia youth has come to NAAF in the form of Leah Hayes, who won Sports Kid Of The Year (SKOTY) at Sports Illustrated Kids. The award goes to kids who have shown exceptional sports talent.

Here’s what Sports Illustrated has to say…

Leah Hayes wins. A lot. The 13-year-old swimmer almost never loses when she races near her hometown of Sugar Grove, Illinois, a suburb of Chicago. She owns six national age-group records, two of which she set this year. In some longer local events, she laps her opponents. Winning fuels her. “Who doesn’t love winning?” she says.

But as much as she loves winning, she hates seeing other people down. After a victory, Leah will often swim over to a competitor who is taking the loss hard and console her. Officials tell her coach how impressive Leah’s sportsmanship is. And she wants to make others better. Her relay times are sometimes faster than her individual ones.

There was a period, however, when Leah wasn’t so confident. When she was six, she began to suffer from alopecia, a disease that causes hair loss. After struggling with its effects, she now embraces her look—and uses her success in the pool to spread a message: “Don’t let anything hold you back. Be confident in everything you do.” Her ability to win races makes her a great swimmer. Her ability to do it with grace and positivity makes her the 2018 SportsKid of the Year.

This story appeared first at sikids.com.

If you need a good foundation for block coding and/or want to join Programmers Coding Baldly, this is the website for you. Subscribe to Sprocket today!

Sprocket actually made a typo–the URL is scratch.mit.edu.

Scratch, is a computer coding website created by MIT, is great for all levels of block coders. It is fun and easy to do. On scratch there are easy tutorials and on youtube.  There are various types of games, from catch games, to mazes. If you are interested in block coding I would recommend this website. This is the link for Scratch. http://scratch.mit.edu.org

Hello! I’ve decided to create an alopecia community based on coding in Scratch, the block-coding programming language that has been a hit for anyone who likes to code. It’s called Programmers Coding Baldly, and I’ll be partnering up with Sprocket, run by my friend and colleague Ella, to bring STEM and coding to the world of alopecia. Scratch is a website where you use colored blocks to form code, which you can then run and share to the world. With Scratch, alopecians can get a new kind of courage–one that comes from the knowledge that they don’t have to be Bill Gates or Elon Musk to create something special. My Scratch account is Staria07, and you should definitely check it out. Anyway, I hope you liked this post. Make sure to join Programmers Coding Baldly and check out Sprocket!

Coming up soon (December 4th, mark your calendars) I’m going to be selling $0.50 alopecia pins to celebrate. It might be trivial, but everything is going to the NAAF or National Alopecia Areata Foundation. Only a little will help!